(click below to see complete details in the article)

The kids will be building Sand Castles sponsored by IB Optimists.

Next Event: Pot Luck Dinner, TUESDAY, DECEMBER 18 4:30 p.m. @ Bill Zidbeck’s home, 1107 Fifth St., IB. Bring a “white elephant gift to exchange and be ready to sing! (Enthusiasm much more important than singing ability.)
We have gifts and food gift cards ready for delivery to our seven families on December 22 at VIP.
Wow!  Same day as our party:  Dinner for homeless at IB Methodist Church Neighborhood Center as part of Interfaith Shelter.
Virginia has main dish (ravioli) and if you would like to contribute we could use the following:
SALAD; ROLLS; DESSERT; MILK or other drink.
The maximum number will be 12 people, but since this is the start of the shelter there may only be a few because it takes a while to place people in the program. If you would like to bring one of these four things to our party, please email or call/text Virginia @ 619-341-2656. We will deliver the food by 6:30 p.m. I will let you know exact number by Monday night.
Best Wishes to All! Virginia
(Sue and RC are still in Antarctica.  Facebook photos look like they are having a good time.)

It is with great sadness that I share news of the death of Courtney Arciaga, daughter of Sue and RC.  Courtney had a form of progeria, called the aging disease, and had been fragile her entire life.  However, Courtney had a great spirit and loved helping with Optimist fund raising events. That tiny body fought very hard and lived her life to the fullest.  I always thought God selected the perfect parents for her because Sue and RC encouraged her and fought for her with patience and love. The family has gathered together now to mourn and remember their wonderful “princess.”

Donations can be made in Courtney’s name to the Sunshine Foundation. I’m sure you could give checks to the family later or you could send donations directly to: Sunshine Foundation, 1041 Mill Creek Drive, Feastereville, PA 19053. Optimists, some of you will remember that a couple of years ago Courtney  did a presentation about this group at our meeting.  It is similar to Make a Wish and Courtney enjoyed several trips courtesy of the foundation.  You can find their website at Sunshine Foundation.

Just remember the beautiful person that Courtney was her entire life…

A couple of you have asked how you can help with our Thanksgiving Dinner delivery and our Adopt Seven Families for Christmas. One way would be to donate to our holiday fund. You could send cash or a check to Bill Zidbeck at 1107 Fifth Ave. IB 91932.  Bill is coordinator of our holiday projects. This is a voluntary donation of any amount you could afford.

Secondly, we have a “Decorating Meeting” next Tuesday,  Nov. 14 @ 4:30 p.m. at Bill’s house. You would be wrapping boxes to hold the food for our seven families. Bring along any Thanksgiving themed pictures.
Delivery date to VIP Village (where children of our seen families are enrolled) is Monday, November 20. Barbara is coordinating this. She needs about three people to transport the food to VIP Village from Bill’s house.  Families will receive the food at the school that day. Let Barbara know if you could help. 9:30 a.m.??
Food Drive pickup at the two IB Charter schools will be either Nov. 16 or 17. Let Eric Syverson know if you can help; his number is 619-855-0214.
SAVE the DATE:  Holiday Party with white elephant gift exchange will be at Bill’s house (1107 5th) on Tuesday, December 19 @ 4:30 p.m. This is a pot luck and always FUN!!!
Happy Thanksgiving! 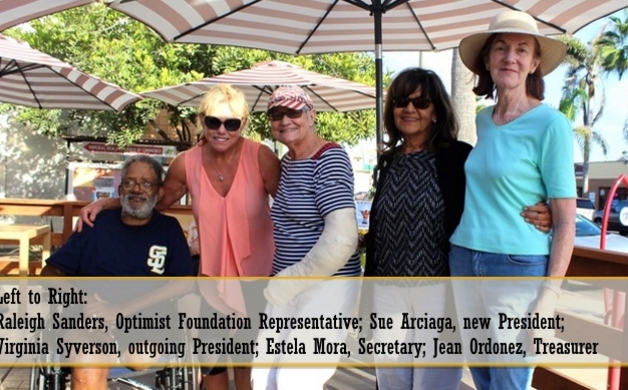 Gallery: The Imperial Beach Optimists Swore In New Officers and Celebrated Another Successful Year and Handed Out Awards on Tuesday [4 Images] Click any image to expand.

The Imperial Beach Optimists Swore in New Officers and Celebrated Another Successful Year as They Honored Members at on Ice Cream Social on Tuesday at Seaside Candy!

The Optimists have been very instrumental in helping children in IB every year and one of their major events every year is sponsoring Kids N Kasles at the Sun and Sea Festival.

The Imperial Beach Optimists meet the first and third Tuesday’s of the month at the Fleet Reserve at 659 Silver Strand Blvd. in Imperial Beach. If you have an interest in becoming a member, stop by a meeting or contact any member.

Note: If you would like to make sure you don’t miss stories like this or any other news about the community of Imperial Beach and South County, please be sure to sign up for our newsletter. Please note that every subscriber of our newsletter receives a Community Calendar of Events at the 1st of every month. Click here to: Subscribe Everyone in attendance introduced themselves. Don has ordered 30 Optimist pins so we can learn each other’s names better.

Ken who does knife making and historical displays would welcome a sign saying his events are sponsored by IB Optimists. He and Virginia will research this.

REMINDER: Dues of $85 for the year (or installment plan amount) are due now. Checks could be sent to Treasurer Jean or given to officers at any time. Jean’s address is: 156 Elm Ave. IB 91932

POSSIBLE FUND RAISERS: Since Little Red Café is no longer in business, we need to find new fund raisers. Sue and Gaby will speak to owner of Big Kahuna where we could earn a percent of dinners. Barbara suggested Sea 180 for its Making Money Mondays. We could also have a basket auction there. Joe will speak with someone about earning money through H & R Block tax prep.

SUN & SEA REPORT: The Festival will be July 14 with Mayor’s breakfast and other events on Friday, July 13. Eric attended the first meeting this week. The day after Sandcastle Saturday will also be a beach concert by the local band, P.O.D., so it will be a full weekend.

SPEAKERS: Sue will set up a calendar for several speakers. We will have Bill talk about his life soon.

ROBERT BURNS NIGHT: Don announced he will host a “Burns Night” event at his home in January (20th?). This will feature the story of Robert Burns, famous Scottish poet.

Meeting adjourned by President Sue with “Promise Yourself” creed. Next meeting: TUESDAY, NOVEMBER 7.